We work at a wide variety of outreach and service projects throughout the year. Please join us!

Thus is followed, in the spring of 1855, one-hundred and six persons organized into a Lutheran congregation that they might better serve their Lord, that He might be their guide and protector while traveling through a strange, unknown country.  They named the congregation "Palestine" in keeping with the description of the land they were first to possess on coming to Iowa; and named Ole Anfinson to be their first pastor.  By covered wagon, they moved from Illinios to a destination in Story County, Iowa, near the present day location of Palestine Lutheran Church.

They reached their destination on June 7th. The following Sunday, they gathered and gave thanks to Almighty God for his guidance and protection as they made their journey.  The first building in the new settlement was a simple shelter with a roof of prairie grass.  This served in summer as the first house of worship for the Palestine congregation.  In 1860-61, work began on a permanent church building, but because of the Civil War, this was not completed until August of 1866.  Rebuilt, remodeled and enlarged on several occasions, this building served well until destroyed by fire, April 1957.  Work began the following spring on a new building.  The Opening Service of Entry was held for the present building in September of 1959.  An addition to this building was dedicated in January 2005, as we began the celebration of our 150th year.  Today people from Ames to Des Moines call Palestine home.  We welcome all people of all ages as servants of God's rich grace!

NORWEGIAN IMMIGRANTS FROM LISBON, IL brought back this report on land in Iowa in 1854.

to proclaim and live God's Holy Word
to nurture and support our membership, and
to enable us to live our faith in our daily lives. 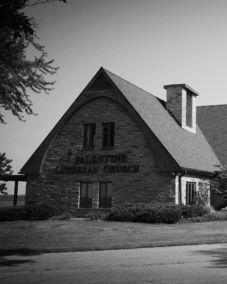 News and updates from the church office.